Women in Motion. a new funding and support network for women’s initiatives was officially introduced by its founding members and leadership, Wednesday, August 30, in a press conference at the home of Ms. Martha Yarborough.

Women in Motion is a unique new volunteer-led has been formed to enable women, and men, to combine charitable donations and provide significant grants focused on the critical needs of women, children and families living in the greater High Point community, including Archdale, Trinity, Thomasville and Jamestown.

The group is the result of a partnership between The L. Paul Brayton Family and the High Point Community Foundation to establish a women’s initiative in honor of Paul Brayton’s late wife Gwendolyn Kay Brayton.

The goal is to help women and girls take the next step toward personal, economic, and professional success in life, based on a vision of community empowerment.

“By supporting philanthropic activity and leveraging community collaboration, we envision a community where women and girls are wholly supported with knowledge and resources to nurture their growth,” says Dr. Virginia McDermott, Interim Dean, The Nido R. Qubein School of Communication at High Point University. “We want to encourage a diverse group of people in the community to get involved and join together to help women and girls achieve their full potential.” 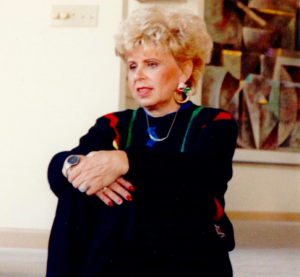 Anyone can be a donor and any amount is appreciated. Through year-end, 2017, the community is encouraged to donate to help match a challenge gift of $250,000 to grow the endowment for grant making. A donor can designate a gift in honor of a special woman or in remembrance of a woman who was important in their life. All who contribute will be recognized as a “founding donor.”

Starting in 2018 supporters (women and men) are invited to become members of Women in Motion and will have an opportunity to vote on how to distribute annual grants in the future.

Critical community issues will be researched along with local nonprofits addressing selected issues to create a ballot of possible grants for supporters to consider. This process will include a thorough review of nonprofits’ goals, financials, leadership, sustainability, and measurable results.

Women in Motion of High Point is committed to building a large community of educated, strategic givers who are inspired to make lasting change in our community through the impact of collective giving.

About The L. Paul Brayton Family—

Paul Brayton has long been considered one the industry’s innovators and promoter of design driven contract furniture. He formed his own company, L. Paul Brayton Ltd., in High Point in 1971 and initially manufactured planters and accessories. One of his more famous installations took place at the Nixon White House and he also had his planters used by the City of High Point. In 1973 Paul founded Brayton International to manufacture high-end design-driven contract furniture.

Gwendolyn (Gwen) Brayton was a devoted wife and mother who had a keen artistic eye and played an important supportive role in the establishment of the family business. She and Paul met in 1961, they were married for 36 years, raised five children, built a remarkable business together and, as Paul liked to say, she was the “wind beneath my wings.”

Tragically, Gwen died from brain cancer in 1997 at the age of 57. The Women In Motion fund was created to support her core family values to the community at large.