For 5 days, High Point Community Foundation President, Paul Lessard, was challenged by the Greater High Point Food Alliance to live on a typical food box and only $4 per day. This may be a challenge to Paul but it is a way of life for hundreds here in High Point. This is his diary.

It is Thursday and I have just completed my first 24 hours of the Food Box Challenge. My box was delivered a few hours ago and my initial review of the contents revealed a lot of food.  I typically try to stay away from carbs so I gave back the Sugar Smacks cereal (which I love) and the cheese crackers.  The first evening I dug into the raisins on my way home and because I normally don’t eat at night I just drank one of the fruit juices after I worked out.  The next morning I ate the oatmeal and spent a little of my daily $4.00 allowance on a fruit bar and a juice.  For lunch I had beans and rice and for a snack I just ate an apple (Honeycrisp, which are killer good, that but killed the rest of my per diem).

So far I’m not feeling deprived, but I do realize that I am being much more intentional about what I am going to eat and when I am going to eat it.  I’m thinking about closing the night out with oatmeal and adding my raisins.  In the interest of full disclosure I should reveal that I did have a stomach flu earlier this week and my appetite is not what it usually is… so we’ll see what happens when it comes roaring back.

It is April fool’s Day and I’m learning quickly that being on this Box diet has its moments.  I started the day with a business breakfast and my 2 companions had some of Tom’s best breakfast offering and I went with oatmeal.  You realize quickly that what we often take for granted is out of reach for so many.  A breakfast which typical includes eggs, bacon, grits, toast with the more adventurous going for real butter, does add up venta online viagra.  You can walk out with a bill of $18.00 plus and that would shoot my $4 a day per diem for almost a week.  You realize that food does indeed represent an economic divide that very subtlety separates us.

The rest of the day included a lunch at the String & Splinter with a donor and because I have soup and macaroni in my box, I went with those staples and missed out on a very serious barbecue offering.  It’s funny, but the sting typically comes while selecting the meal and watching what my compadres eat.

The evenings are less stressful because I typically don’t eat much at night.  The raisins are coming in very handy and my per diem is keeping me from drinking sodas.  I do; however, have moments when I wish I had not given away my Sugar Smacks cereal!

I knew the weekend would be difficult because you have more time to think about food. I also have a 23 year old son who is a constant and ravenous eating machine and I’m really starting to envy his primordial grazing instincts.

I skipped breakfast and worked out for a couple hours which took the edge off and then I went over to High Point University to meet a young man and his family who are from Austin, TX. I initially met him through my sister who lives there and I’ve played a very small role getting him to HPU where he will be attending in the fall. The campus was overflowing with visitors as I picked them up at the Slane Center and since they are from the capital of beef barbecue I take them to our local barbecue icon, Carters Barbecue to introduce them to Carolina barbecue.

Zach and his parents all tried the sliced barbecue plate which smelled great and looked even better.  I tried to envision what was left in my “box” and I end up ordering corn, green beans and… yes, you guessed it mac and cheese.  Of course I had to tell them about my box diet and it opened a really fascinating talk about food insecurity, which is something they deal with in Austin, TX. Their issue stems from the fact that their city is growing like crazy and is attracting highly educated, high-income folks that are dramatically driving up the real estate market.  Great for the area, but challenging for folks who struggle economically. They tell me that people who would typically not be associated with food shortages are suddenly showing up at the shelters for food. This  is also something we are seeing in High Point as well.

As I drove home, I pass by the HPU athletic fields where I played soccer once upon a time and noticed there is a huge track meet going on. I had to stop and I wandered through the stadium watching some of the events and I immediately realized that everyone is eating and they’re eating all the stuff I want to be eating!  Of course they’re active college athletes and need the nourishment, but they eat the way I used to… thinking very little about the fact that 60% of the population can’t afford to eat what they simply view as fuel for their upcoming events.

I’m down to pasta, canned goods and raisins so I ate peaches before I took off for church and finally found something my dog won’t eat.  After church we took my son’s awesome new girlfriend to lunch at Carolina Diner and I went with the vegetable plate.  I figured this was the closest thing to the canned goods I still had on hand.  I ate carrots, corn and… yes… once again… mac and cheese, which I’m realizing, may be the staple and reoccurring theme in my Box Challenge diet.

The mac and cheese thing reminds of something I heard early on in the establishment of the Greater High Point Food Alliance and that is we as a culture have forgotten how to cook good food.  This pastor on the Board talked about how he had learned to cook by watching his Grandmother. She was old school and knew how to stretch good food and make life interesting.  It is in many ways an art form that we are losing and too often the food choices we are making have more to do with how much is it and how long does it take to heat up?

Went with the Cranberry Cocktail and raisins for dinner which didn’t do much so I followed up with a peanut butter and jelly sandwich which I knew was cheating, but man did it taste good.  I hit the scales before I went to bed and I’ve lost 9 lbs. since the start of the Challenge and I’m sure that has also been impacted by the flu and the fact that candy bars have not fit in my budget this week – hmmm… could be a lesson there…

I started the morning by shifting through my box which is starting to get a little lean… I have several cans of vegetables, some pasta, and some ravioli (which reminds me of my childhood) and some enchilada sauce?!  I’m in a rush and I’m embarrassed to say, but I opened a can of peas and ate them cold – which actually turned out tasting pretty delicious.  I ended up sharing the peas with our killer Schnoddle watchdog, Ellie, who like my son, will eat anything.  We toyed with the idea of mixing it up with the enchilada sauce but both of us immediately realized it would be a disaster.

I have a food confession to make, I did stop on the way to work to pick up my newspapers and I bought a Kickstart, which is a new power drink that came out during the Super Bowl – you’ll probably remember the “Puppy, Monkey, Baby” commercial that all my guy friends loved and my wife and most of her female friends thought was really stupid. Anyway, I had to try one (because the little creature was so cool) and now I’m addicted and I’ve been drinking them every morning.  They are only $1.25, so I can afford them on my per diem, and the caffeine kills my appetite.  Unfortunately they are only contain 5% juice, but they are also only 60 calories and the caffeine has made me very productive at work!

I had lunch with my wife, which we do every Monday and I went again with the beans and rice… which was still very good and filling, but I am seeing a cycle that I imagine people of poverty encounter and that is food gets pretty boring if you eat the same thing over and over.  It makes you realize that education on cooking and teaching folks about different types of healthy food is important.  Sometimes I think convenience drives too much of what we do in life.

I’m speaking tonight and will wait until I get home to decide what to eat and something tells me that whatever it is there’s a good chance it will be covered with enchilada sauce. 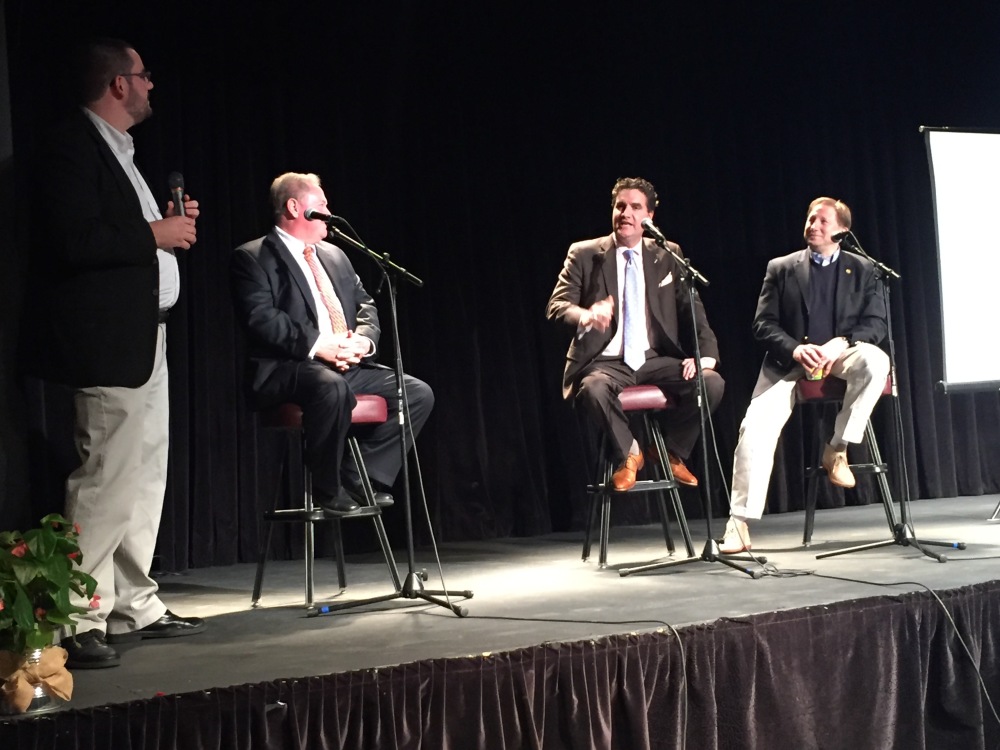 Carl Vierling, Matt Thiel and Paul Lessard discuss their experiences of living on nothing but a food box and $4 a day.