Even when you have a calling from God, you can still use a lot of help from guidance counselors, parents, teachers and community leaders.

Jhinika Louve attests to this. The recently graduated High Point Central student is on her way to Indiana Wesleyan University to study Christian ministry and, one day, become a youth pastor.

Jhinika’s dedication and drive—plus a 4.1 GPA—were contributing factors to her earning the High Point Central High School Class of 1960 Scholarship, which is managed by the High Point Community Foundation.

When Jhinika started high school her plan was to become a physician and later this changed to becoming a psychologist. After some introspection, she decided on the ministry.

“I’m very emotionally attached to people and losing a patient would be difficult,” says Jhinika. “I realized I would be more useful in the ministry,” where her people skills and counseling skills would also be put to good use.

Faith played the most significant role in Jhinika’s decision 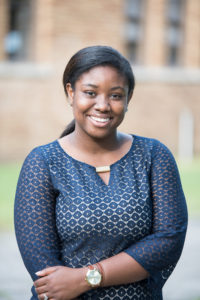 How does a calling happen?

“Different ways,” says Jhinika. “Mine came through one of the speakers at a convention on using your Godly gifts, which helped me reflect on my gifts: helping people and talking to people of my age. I thought of the past four years and the moments I’ve had with my classmates to get through their struggles and counseling them. I really enjoy this aspect of being a youth pastor.

“I also did a lot of praying and received guidance from leaders in my church (Hayworth Wesleyan in High Point).”

Jhinika committed herself early on to get multiple scholarships to go to college.

The scholarship was founded by Central alums from the Class of 1960 on the occasion of their 50th class reunion. Jhinika is the 11th student to receive the scholarship.

Since her freshman year, Jhinika’s kept her eye on going to college, participating in a wide range of school sports and activities including being JV volleyball captain, competing for the school in shotput and discus throws, the Beta Club and National Honor Society. Her community involvement has included volunteer work for Interact Club, the 5k for Education, and a Day at the Park at City Lake.

“My favorite class was English,” says Jhinika. “I am a book nerd. My nose will always be in a book.”

Jhinika can’t wait to head off to Indiana Wesleyan, but she has fond memories of Central.

“There’s a place for everybody at Central…drama people, artists, athletes, people into everything,” says Jhinika. “There are so many opportunities to get out in to the community and get to know students and faculty with constant encouragement to be very active in school,”

As a future minister, Jhinika is, of course, grateful in acknowledging all the positive encouragement she’s received from others.

“I thank God first for the opportunity and then my parents,” says Jhinkia. “And thank you to the class of 1960, whose scholarship definitely made the process of thinking about college easier.”