Three future college students volunteered to speak at a special reception marking the first year of Say Yes Guilford, Friday, May 20 at High Point University. What they said should make you proud.

This fall, Gretchen Blankinship from High Point Central High School will begin her studies at the University of North Carolina at Chapel Hill. Betty Lulseged from Northwest Guilford High School has been accepted at Harvard, Yale and Princeton. And Juwann Wrenn from Southwest Guilford High School will attend UNC-Wilmington. Each student is one of the nearly 5000 Guilford County Schools students who can receive Say Yes scholarships in the program’s first year. 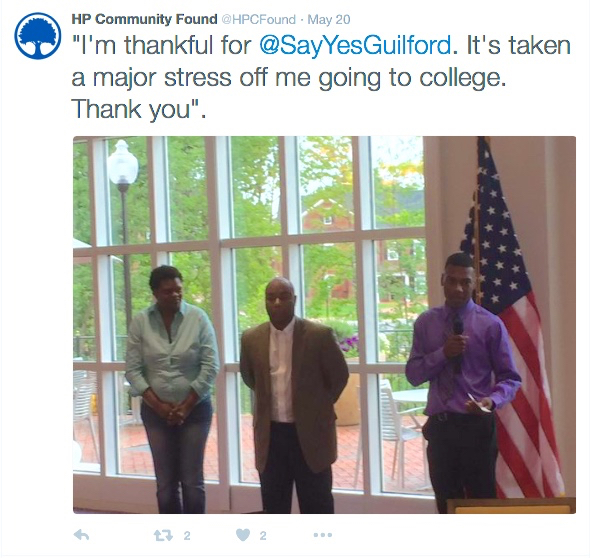 Juwann Wrenn in Foundation tweet, speaking about his scholarship.

The reception was sponsored by the High Point Community Foundation to honor the graduates and celebrate the success of Say Yes. David Miller, Foundation chairman, presided and Foundation president Paul Lessard opened with an invocation and a brief talk about working with David and donors to raise funds for the program.

Say Yes donors Eric and Alyce Hill were recognized for their generous support of the program. Eric Hill told of his original desire to help a child with their education. This had brought him in touch with the Say Yes Guilford effort, because of its far-reaching potential to provide scholarships for many of the county’s high school graduates.

“Why help just one, when I can help thousands?” said Eric.

Mary Vigue, executive director of Say Yes Guilford, spoke of visiting every high school in Guilford County and speaking with all students to promote the program that incentivizes students to study hard, stay in school and graduate.

Meg Sheehan, Western District Superintendent, Guilford County Schools, gave the district’s perspective of the successful first year of the program, which has certified 77% of the district’s seniors as eligible for scholarships.

Perhaps no one summed up the sentiments of thousands of parents and better than the sprinter from Southwest Guilford, Juwann Wrenn.

Say Yes Guilford is a 501(c)3 nonprofit organization that rallies communities around the goal of every student in the public school system graduating high school, and then helps those students access, afford and complete a college or other post-secondary education.